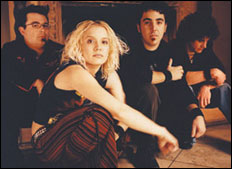 (CelebrityAccess MediaWire) — After tearing up the stages this year at both Canadian Music Week and NXNE, followed by showcases and interest from several major multi-national record companies, rock’n’roll quartet Oliver Black have signed a global multi-album deal with New York City based TVT Records. Upcoming releases will see the band crossing the globe this coming year, as their much-anticipated debut album hits the shelves in 2005.

Oliver Black will begin pre-production on their record in early 2005 and plans see them entering the studio shortly there after to begin recording for a late spring/early summer release. While the name of the producer for the album is yet to be disclosed, fellow Canadian and U2 mega-producer Daniel Lanois will be getting behind the board to produce ‘The Cool’, a song he gave the band last summer.

Oliver Black’s lead vocalist Serena Pruyn believes that joining forces TVT was definitely the best strategy for the band. When asked Pruyn enthusiastically commented“We are all really happy with our decision to move forward with TVT. They love us and we adore them, that’s the only way these relationships last, we are both committed to each others vision. We are looking forward to getting the first one in the can and then getting out on the road to show the world what we’ve got to offer. Don’t worry we’ll be back soon!”

TVT Records provides the credibility and focus of an independent label and the marketing and distribution power equal to the majors. Priding itself on grass roots artist development, TVT's eclectic roster runs the gamut of many of today's most popular artists. Internationally recognized artists on TVT's roster include Sevendust, Snoop Dogg & Tha Eastsidaz, Default, Lil Jon &The Eastside Boyz and the Ying Yang Twins.

Steve Gottlieb, President and founder of TVT Records welcomes Oliver Black to the labels roster with open arms. “From the first moment Serena and band hit the stage they had everyone in the palm of their hand. I’m hoping to help Oliver Black give the same chills I felt there and then, to the rest of the world.”

The band’s upcoming releases will be made available in Canada via Universal Music. While North America tour dates are being handled by The Agency Group (Nickelback, White Stripes, Evanescence).

OLIVER BLACK, who are featured in this month's Chart Magazine; have just returned from an industry showcase at the world famous CBGBs in New York City. This March you can catch them live at both the South By Southwest Music Festival in Austin, TX and Canadian Music Week in Toronto as part of the coveted Chart Magazine Music Showcase. –by CelebrityAccess Staff Writers