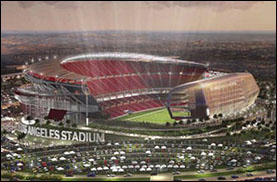 CARSON CITY, CA (CelebrityAccess) — The Carson City Council voted unanimously on Tuesday to build a new $1.65 billion, 70,000-seat stadium to potentially serve as a home to the two NFL teams, the Oakland Raiders and the San Diego Chargers.

According to documents provided by the city to the Orange County Register., the proposed 70,000-capacity stadium with room for an additional 5,000 seats for special events. The plans also would see the construction of a 350-room hotel on the site and 850,000 square feet of commercial, retail and entertainment space, as well as broadcast studios and office space that could be used for the NFL Network.

“There are two things we need in Southern California,” Carson Mayor Albert Robles said after the vote. “One is rain and the other is football, and today hopefully we took care of that because football is coming to Carson.”

The next step, according to the Orange County Register, will be negotiations with the two teams on control, construction and financing of the stadium and related projects. Both teams will also continue to pursue negotiations for stadiums in their current markets, the Register said, with both cities eager to keep their teams at home.

An analysis conducted by the city suggests that with both teams as tenants, the city would receive $223 million over a span of 40 years. The NFL would contribute $400 million to the construction project with the newly created Stadium Authority on the hook for the rest, recouping their investment from seat licenses and naming rights agreements. As well, NFL teams would be responsible for as much as $37 million in street improvements and other stadium-related infrastructure costs over a five-year period. – Staff Writers