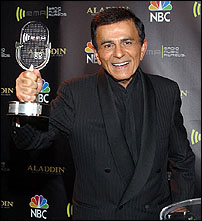 (CelebrityAccess News Service) – Casey Kasem, host of the most familiar countdown programs on the air, signed a new long-term contract with his current syndicator, Premiere Radio Networks. Each weekend, Kasem will host American Top 20, which will continue featuring his signature long-distance dedications and stories behind the songs. He will host two versions of the program for Hot Adult Contemporary and Adult Contemporary stations nationwide. Kasem was represented by Eric Weiss of the Weiss Agency, and terms of the deal will not be disclosed.

"Casey defined the genre of countdown programs and continues to infuse an almost magical quality to each broadcast," said Kraig T. Kitchin, president/COO of Premiere Radio. "We're fortunate to have his talents at Premiere and to be able to share them with hundreds of stations in dozens of countries each week."

Kasem commented, "I've been working with Premiere over the last several months to find a way for me to be with my audience in every market in the nation without having to compete with myself by being on both Contemporary Hit Radio stations with American Top 40 and Adult Contemporary stations with American Top 20. With this new contract, I'll be counting down the hits for my listeners into the next decade."

His friendly "crackling" voice style has taken him to the top of his profession while his approach can be summed up in his trademark phrase, "Keep your feet on the ground and keep reaching for the stars."

Kasem, who once dreamed of being a baseball player but ended up as a radio sports announcer in high school, has since become the youngest member ever inducted into the National Association of Broadcaster's Radio Hall of Fame. He also has his own star on Hollywood Boulevard's Walk of Fame. In 1997, Billboard Magazine presented him with its first-ever Lifetime Achievement Award. Plus, Billboard Magazine recently presented both his Top 40 and Top 20 shows with the Network/Syndicated Program of the Year Awards, an honor he has received many times. This year, he was honored with the "Radio Icon" award at the Radio Music Awards. –Jane Cohen and Bob Grossweiner