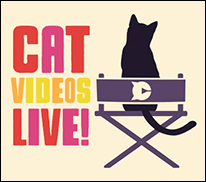 Billed as a 'family-friendly, feline film, cat comedy event and social gathering for all ages' the tour features a slew of curated cat videos sourced from the wilds of the internet and presented in a live experience on the big screen. Each two-hour show will be tailored to its individual market with locally programmed media and celebrity guest hosts and videos.

Why cat videos? Well, if you're new to the Internet, videos of felines engaged in various shenanigans has proven to be a popular phenomenon and, according to YouTube analytics company Tubular Insights, that as of 2014, are more than 2 million cat videos on the popular video-sharing website.

“It’s such a huge audience that we really had to put this multi-media event together to meet the pent-up demand to take this social phenomenon to a higher professional level,” explains Kitting Factory Presents president Mark Dinerstein.

“We’re delighted to make the concept of CatVideos.com into a live touring experience for the family—cat [and dog] lovers alike. Cat Videos Live! is a rollicking roadshow combining community, comedy and technology. It’s a showcase of local, national and international filmmaking talent. It’s an amazing outpouring of both creative output and shared experiences and interests,” Dorris added.

The tour will be serving some socially beneficial purposes beyond the propagation of cat-themed videos. They are partnering with two national feline-related charities: Panthera, which works to protect big cats, and Friends for Life, which leads no-kill shelter and adoption care efforts in the Southwest. As well, the tour will partner with multiple local charitable beneficiaries.