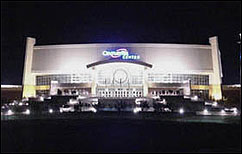 BOSSIER CITY, LA (CelebrityAccess MediaWire) — Officials at the CenturyTel Center in Bossier City, Louisiana, are working with the city to upgrade the 14,000-capacity venue to help draw more touring acts.

Discussion has been underway for over a year, but it appears that the City Council will be approving an estimated cost of $290,000 for a new curtain and spotlight platforms. The projects will be funded by hotel/motel sales taxes as stipulated in the approved budget for capital improvement, according to the Shreveport Times.

“It’s going to allow the building to become more attractive to promoters in terms that it enhances the flexible nature of our seating,” Williams said. “We have about a half-dozen configurations now, but adding this will mean six to eight new setups that we can do.”

Seven new spotlight platforms are necessary for shows in which the curtain would block the existing lights. The platforms will be suspended from the catwalk, and designed to hold one to two spotlights and people to operate them. Both items are set to be installed by August.

The facility typically hosts 15 to 20 concerts per year. It is also home to a local hockey team and an arena football team. –by CelebrityAccess Staff Writers