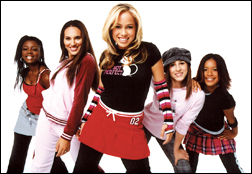 LOS ANGELES (CelebrityAccess MediaWire) –The Cheetah Girls, the all-girl singing group based on the popular young adult book series and Disney Channel movie, have sold more concert tickets on the secondary market than The Rolling Stones and Barbra Streisand, according to the TicketsNow Entertainment Index for September.

"The TicketsNow Entertainment Index is the definitive barometer for gauging the hottest trends in entertainment," said Kenneth Dotson, chief marketing officer for TicketsNow. "Our September data reinforced that attending live events is frequently a family affair. Based on the number of tickets sold to The Cheetah Girls, many parents were treating their kids to what could possibly be their first concert-that's something they'll always remember."

The Cheetah Girls took the number one spot on the concert list with 12.1% of ticket sales, besting the Stones and Streisand who had 5.0% and 4.5% of concert sales, respectively. Following in fourth place was Eric Clapton with 3.9% and Roger Waters in the fifth spot with 2.9% of concert tickets sold.

In the theater category, Wicked retained its position at number one with 32.1% of all theater tickets sold with Jersey Boys in second place with 6.6%. In a sign that the holiday season is right around the corner, the Radio City Christmas Spectacular made its TicketsNow Entertainment Index debut at number three with 5.7% of theater ticket sales.

The New York Yankees led the sports list with 4.9% of ticket sales. Rounding out the top three in the category were the Dallas Cowboys with 3.7% and the Jacksonville Jaguars with 3.3%.