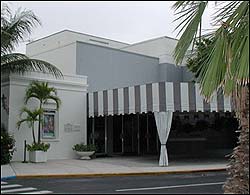 (CelebrityAccess News Service) – Clear Channel Entertainment will no longer be booking the 950-seat Royal Poinciana Playhouse in Palm Beach, FL, when its lease is up next October.

"It's all economics," John Poland, general manager of Clear Channel Entertainment's South Florida division, said in the Sun-Sentinel. "The way tours are designed and priced now, even shows that fit into a small theater can't recoup."

In 2000, Clear Channel hinted about ending its lease at the venue after doing so at Fort Lauderdale's 1,200-seat Parker Playhouse.

For the 2004-2005 season, the Palm Beach Broadway series will be presented at the Kravis Center. In this season's series, only two shows were booked into the Royal Poinciana. — Jane Cohen and Bob Grossweiner