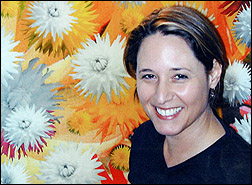 (CelebrityAccess News Service) – Jodi Goodman has transferred from Clear Channel Entertainment’s Boston office to the San Francisco branch, Bill Graham Presents. She booked the FleetBoston Pavilion, Orpheum and Avalon while in the Northeast. Her duties at CCE Music West were not announced at press time. Jodi can be reached at jodigoodman@clearchannel.com –By Bob Grossweiner and Jane Cohen

(CelebrityAccess News Service) – Indigo Girls, Dixie Chicks and Ben Folds will perform October 10 in a benefit concert for the Honor the Earth Foundation. All net proceeds from the Clear Channel Entertainment promoted event at Charlotte's Verizon Wireless Amphitheater will be donated to Honor the Earth.

Honor the Earth is a national organization that raises funds and public support for Native environmental groups. It is devoted to building an informed Native and non-Native constituency that can coalesce strategically around specific environmental issues, act as a voice for the Earth and bring about policy change. This work is necessary to meet the needs of communities to defend and preserve the Native way of life for future generations.
Honor the Earth has identified the biggest needs in the Native environmental movement as money and public awareness about issues.

Honor the Earth was created to break the isolation of communities, develop large numbers of supporters who can act in solidarity with Native peoples and raise critically needed funds to support communities in carrying out their work. Since 1993, Grammy Award-winning Indigo Girls have headlined five Honor the Earth concert tours that have raised hundreds of thousands of dollars for Native grassroots groups. Bonnie Raitt, Jackson Browne, David Crosby, Joan Baez, Shawn Mullins, Edwin McCain, Ben Harper and others have performed for Honor the Earth in the past. –by Jane Cohen and Bob Grossweiner