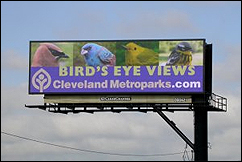 (CelebrityAccess MediaWire) — Clear Channel Outdoor is to enter the digital-signage market with the deployment of a pilot network of seven digital LED boards, installed adjacent to major roads throughout the Greater Cleveland area of Ohio.

The 14-by-48-foot billboards, supplied by South Dakota-based Daktronics, will be situated in seven strategic roadside positions, selected because they have long approaches during which drivers can view the signs.

The LED billboards will replace existing Clear Channel static billboards in each location, and the company says it has worked with all the individual cities in which the signs are located to obtain the necessary permits for the move to digital content.

According to Clear Channel, content on the LED network will initially comprise public-service announcements from local nonprofit institutions such as the Animal Protective League, Cleveland Metroparks Zoo and Cleveland Museum of Natural History, with commercial advertising content scheduled to begin at the beginning of July.

Bill Platko, Cleveland’s division president of Clear Channel Outdoor, said that the network’s technology would enable advertisers to reach nearly 1 million drivers per day with messaging tailored to “create an immediate call to action or to build brand awareness”.

“[This] digital network complements our existing outdoor inventory, allowing clients the ability to immediately customize time-relevant messages to consumers, providing an exceptional benefit for Cleveland advertisers and consumers,” he said.

Platko said “that airtime on the network will be sold as a package across all seven displays. A standard eight-second ad, playing once every minute over the duration of a month, will cost between $32,000 and $33,000, Platko said, rising to $40,000 for the same airtime with category exclusivity. This compares favorably to a one-month buy on static roadside billboards, which cost on average around $8000 each, equating to $56,000 across the seven-site network.”

Initial advertisers on the network include CharterOne bank, Cleveland’s Cedar Point amusement park, and a local college. Platko explained that the pilot, which will run for the life of the displays, is intended to evaluate the business model, the technology platform and advertiser reaction to this new medium.