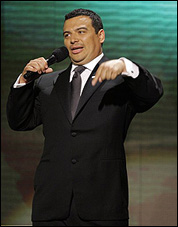 NEW YORK (CelebrityAccess MediaWire) — Comedy Central, like many other television channels has been forced into reruns as a result of the the month-old WGA writers and as a result, they are looking into other avenues to generate revenue. One of these methods appears to have been paying off in a big way. According to Variety, the comedy network announced this week that their live comedy touring business has generated more than $40 million in revenue in the five years since it started.

More than a mere tour, Comedy Central can offer a whole promotional package, offering comedians on-air exposure with tour tie-in specials on Comedy Central as well as a brisk trade in DVDs and CDs of comedy material and performances.

These packages are often very attractive to promoters and performers both – for promoters, the tie-in and on-air promotion means that they often need to do less local promotion for the show, saving scratch on billboards and radio spots. Artists make out too as Comedy Central typically pays more to performers than an outside tour promoter might as the network can monetize the tour by promoting on its website and providing links to ticketing agencies, and utilizing tour material as content.

According to Variety, the network has staged 15 such tours since they kicked the scheme off in 2002 with Jim Breuer's "Lighten Up Tour," which grossed approximately $1.5 from 43 shows.

Subsequent tours have included a Dave Attel and Lewis Black who scooped $4.5 million for 59 shows and the biggest earner, Carlos Mencia's "Punisher" tour which topped $10 million for 100 dates and was heavily cross-promoted with a television show, "Mind of Mencia" which airs on the network. – CelebrityAccess Staff Writers