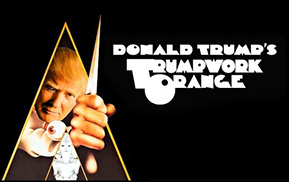 (Hypebot) – When determining whether or not to move forward with a lawsuit over a parody, it is important to first determine that the original work has, in some way, been negatively impacted by the parody, something which a recent 'Trumpwork Orange' lawsuit failed to take into account.

One of the tests for fair use as it pertains to copyright is the impact that the use of a work has upon the original. While this is but one of four tests used, it is arguably the most important when it comes to advising a rights holder on whether or not to move forward with any legal action. After all, regardless of whether the use of the work is indeed fair use, what would be the point of taking action against the use of a work if that original work were not negatively impacted, or if the impact was positive? There would seem to be no point to expending any time or capital in a legal fight in those cases, yet we regularly see such thinking ignored.

Such is the case concerning Hugh Atkin, an Australian who produced a parody trailer in the style of A Clockwork Orange for President Elect Trump's campaign, entitled A Trumpwork Orange. He originally put it alongside the original movie's trailer, basically to show how he tried to ape the style for his parody. That version was taken down, however, and now we're left with only this version.

Now, when I say that a DMCA notice was filed to get the video taken down, you would be forgiven if you assumed that it had come from our new overly-litigious overlord. But it didn't. Instead, it came from a company that represents Wendy Carlos, the composer behind the soundtrack for A Clockwork Orange. She is the one who created that version of the William Tell Overture featured in the trailer, and she has decided that Atkin needs to license her work to create his parody. In fact, after Atkin filed a DMCA counter-notice and had the video restored, the company representing Carlos went ahead and filed a lawsuit against him in retaliation.

In a lawsuit filed in a New York district court, Serendip LLC is now suing Hugh Atkin for the unlawful use of Carlos’ music in his one minute video.

“Unbeknownst to, and without permission or license from Serendip, Defendant made derivative use of Wendy Carlos’s music arrangement and master sound recording works of the ‘William Tell Overture’, in the soundtrack of Defendant’s video, entitled ‘A Clockwork Trump vs. A Trumpwork Orange’,” the lawsuit reads.

It adds that Atkin uploaded the video around October 23, 2016, “with the apparent purpose of monetizing the video for his own benefit, and with his later stated purpose of ‘providing satirical political comment on the 2016 US Presidential Election campaign of Donald Trump’.”

It's worth noting that the parody video was not levying parody on the song in the trailer, which actually hinders any defense in the name of parody and fair use. Still, we're left with the question of what the impact on the original work, Carlos's iteration of the William Tell Overture, was. It's pretty clear that any claim that this original work was harmed by Atkin's parody would be head-scratching at best. Other versions of the original movie trailer exist on YouTube, after all, and this new parody work even included the original trailer alongside the new creation. It seems that this usage impacts the original work only by maintaining the status quo. And yet Carlos decided to sue.

Interestingly, Atkin wasn't even aware of the lawsuit until TorrentFreak contacted him.

“I did not know that Serendip had commenced proceedings against me. I only found out about the suit via your email, which was a rude shock to wake up to on a Monday morning in Sydney. The complaint has not yet been served on me,” he said.

“I received an email from lawyers for Serendip on October 29 in relation to the takedown notification which had been given by Serendip to YouTube under the DMCA and my counter-notification.

“I responded by letter on October 30 requesting further information about the alleged claim of infringement and otherwise denying any infringement. I never received a response to my letter, and my video was restored to YouTube last week. From their failure to respond, I assumed that Serendip was not pursuing its claim.”

As the TorrentFreak post notes, this isn't the first such lawsuit filed by Serendip. It previously filed a lawsuit against a man in the UK, who used some of Carlos' music in a movie critique of Stanley Kubrick films. That lawsuit is reported to have ended fairly amicably. One hopes that this one will, too.