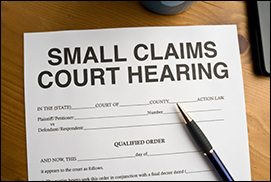 (Hypebot) – Although many active members of the copyright community have been requesting that some form of small claims court be set up as an alternative to filing a federal lawsuit, a new bill being introduced with this theoretical purpose is riddled with issues, and could be primarily utilized by copyright trolls.

By Mike Masnick of Techdirt

For a while now, some in the copyright community have been pushing for a copyright "small claims court" as an alternative to filing a federal lawsuit over copyright law. It's true that, especially for small copyright holders, the cost of filing a lawsuit may appear to be rather prohibitive. But it's not clear that a small claims court is the answer. A few years ago, we wrote about some potential concerns with such an approach, but have also admitted that if set up right, it could have some advantages. But that requires it be set up right.

Unfortunately, a new bill has been introduced, by Rep. Hakeem Jeffries, along with Rep. Tom Marino, to officially set up such a system — and it's done in a way that looks like it will not be well-designed, and instead will lead to a massive rush of small claims, especially by copyright trolls. The bill is called the Copyright Alternative in Small-Claims Enforcement Act of 2016, or CASE Act, and… it's got problems.

Another potentially good feature is that this small claims setup would be able to hear two kinds of claims: the standard ones involving claims of someone violating one of the established rights under copyright law… but then also to hear cases about abusive DMCA notifications, under Section 512(f) of the DMCA. Of course, as we've noted in the past, the federal courts have effectively written 512(f) out of the law and refuse to punish those who file bogus DMCA notices. It's not at all clear how things would change here. The 1bill explicitly notes that the remedies for a 512(f) bogus DMCA notice claim would be limited "to those available under this chapter." But it's unclear if that really means that you could get $15k for a bogus DMCA filing. And that's because the section on statutory damages is clearly written only with people suing for copyright infringement in mind, and not people suing over bogus DMCA takedowns.

For example, it notes that in order to qualify for the $15k maximum statutory damages, it only applies to "works timely registered." But… how does that make sense for 512(f) claims? In those cases, the question of whether or not the defendant timely registered a copyright makes no sense at all. If someone sends a bogus DMCA takedown over a copyright that doesn't exist or that they don't hold, why should its registration status matter? It's almost as if Rep. Jeffries (or the lobbyists who wrote this bill) only tossed in the part about 512(f) claims to appease people concerned about abusive DMCA takedowns, and then completely forgot about it after they included that.

But the really big problem in my mind is that this seems likely to just be swamped by copyright trolls. We already see that they're flooding the federal court system, where multiple rulings against joinder (i.e., the ridiculous bundling of thousands of possible file sharers together) has meant that when trolls do sue, they're generally limited in how many people they can sue. Making the process cheaper, but still offering statutory damages amounts that can be quite scary to the average American, and that can still get the job done of scaring threatened users into paying up fines that are much smaller than the $15,000.

And, yes, this small claims system will allow for discovery, which is the key feature that trolls want. They want to sue, and then get discovery where they can send demands to ISPs for names of subscribers based on IP addresses, and there doesn't appear to be anything in the bill to stop that. It does note that parties seeking discovery need to show "good cause" to enable discovery, but that may be a fairly low bar. It also notes that responding to discovery requests to non-parties in the dispute will be "voluntary" so perhaps ISPs will resist, but that's not certain. And thus, this three-panel board may find itself on the receiving end of a ton of ridiculous claims from trolls who have no intention of following through with the case. One would hope, with the federal court system's copyright docket currently overrun with trolling cases, that whoever drafted this law would have thought through a better plan to stop that from happening here.

1 (1)Another potential issue: the bill would let individuals go after not just actual infringers, but alsoservice providers if they fail to follow through on a DMCA takedown notice. Basically, it exports the DMCA safe harbors to this small claims process as well, but that may mean that internet platforms are going to get dragged through this process that was meant to focus on small claims that could be easily adjudicated.

There's also this oddity. After laying out the specific responsibilities of the three individuals who will handle all of these small claims cases, the bill notes:

When not engaged in performing their duties as prescribed in this chapter, to perform such other duties as may be assigned by the Register of Copyrights.

What, exactly, is that going to entail?

Who knows how this will actually play out. A few years back, the UK introduced its own small claims copyright system. But I have no idea how it's doing. I haven't seen any numbers or indication of how widely it's used. Perhaps it works great and is a useful tool for dealing with small scale infringement issues. But I do worry about the way the bill is currently written and how it can be abused, especially by trolls who just want to pressure people into settling, and where the threat of a $15k award might be plenty.