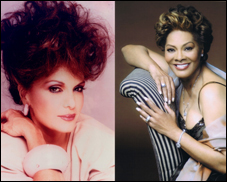 The two were brought together by producer Eric Floyd of Goddess Empire Entertainment. With 175 Top 10 international hit singles and hundreds of millions of albums sold between them, exclaims Floyd, “This music is literally the soundtrack to the lives of a billion!”

Connie Francis is the best international selling female recording artists of all time, thanks to immortal hits like "Who's Sorry Now?,” “Lipstick on Your Collar,” “Everybody’s Somebody’s Fool,” and “Where the Boys Are.” Since making her recording debut in 1955, Miss Francis made concert and television appearances throughout the world.

Over her five-decade career, Dionne Warwick is a true musical legend, thanks to nearly sixty chart hits such as “"Walk On By,” “I Say a Little Prayer,” “Do You Know the Way to San José” and “I’ll Never Fall in Love Again.” As a performer, Miss Warwick, too, has entertained audiences on every continent. She received the first of her five Grammy Awards in 1968 for “Do You Know the Way to San Jose,” becoming the first African-American female artist to win for Best Contemporary Female Vocal Performance.

With worldwide touring and weekly reality series & a TV special in the works these women croon to a busy tune. –by CelebrityAccess Staff Writers