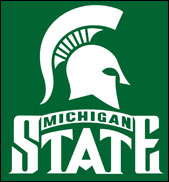 According to the Lansing State Journal, the project will see improvements to the stadium's facilities, as well as the addition of 26,000 square feet of space around the stadium.

Upgrades include the addition of LED lighting and glass panes along concourse walls to brighten the facility and a doubling of bathrooms. Concession offerings will also be upgraded, with four new locations added, bringing the concession stand total to 10.

“Exterior site work and the majority of the interior work on the northern entrances will be done before convocation on (Aug.) 29,” Jason VanZee, a construction project manager for Michigan State University told the State Journal.