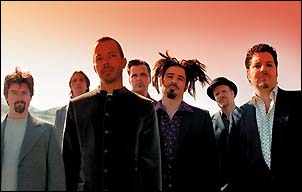 Counting Crows who are currently winding up the US leg of their present tour, bring their Hard Candy tour to Europe starting in January 2003. This follows the Top 10 success of their Hard Candy album, which was released earlier in the year.

The band who have a phenomenal live following in the UK, have already wood the crowds at V2002 and played several sold out shows in different venues around London, including the Royal Albert Hall. Support act for the tour is Gemma Hayes.

Counting Crows release their version of the classic Joni Mitchell song “Big Yellow Taxi” on Feb 3rd which features one of the biggest new stars of 2002, Vanessa Carlton, who lends her tremendous talent to backing vocals.

The tour will include stops in Glasgow, Belfast, Dublin, Birmingham, London, Brussels and Amsterdam.