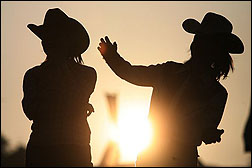 NASHVILLE (CelebrityAccess MediaWire) — While country music has laid claim to a solid share of the domestic music market, it has had faced more challenges in garnering sales abroad.

Japan would seem like a surprising place for cowboys, but if you were there last fall for the 18th annual Country Gold Music Festival, you would have seen some. The festival has been held annually since 1989 and features performances from both Japanese and international country stars has proven wildly popular. Organized by "Good Time Charlie" Nagatani, the 2006 edition featured performances by American country stars such as The Charlie Daniels Band, The Grascals and Cowboy Crush, and Japan's Good Time Charlie & The Cannonballs among others. It is one of the best places to look if you're keen to see Japanese riffing cowboy but the apparent popularity of the festival hasn't translated into sales.

Meanwhile, across the sea of Japan, one can find a slowly growing pocket of country music fans in China. Brokeback Mountain was a huge hit and there are country music shows on television and radio in some of the larger markets but again, strong sales have not materialized. This is due in part to the difference in cost. Chinese are rarely willing or able to pay more than a dollar for a CD which is considerably less than US record companies are interested in parting with their wares for.

Even in Canada, long considered a reliable market, sales have been wilting. According to Ben Kline, EVP at UMG/Nashville, sales are off by as much as 50 percent of what they were a mere decade ago. "American country music continues to be a struggle overseas," Kline said in a recent interview with the Tennessean. "From superstars to developing artists, it's the same story."

The CMA isn't taking this laying down however. In 2000, they established a Global Markets Task Force to address just this problem. Headed up by Jeff Walker, a Nashville-based (And Australian-born..go figure) publicist the Task Force has been trying to raise awareness and create convivial markets for country music abroad. One of their efforts, The third Annual "New From Nashville" concert series is slated to take place in Ireland on Jan 30. This year's featured performers include Jace Everett and Julie Roberts. Everett is making a return trip, starring last year with Dierks Bentley. Judging by the still soft international sales, the efforts of the task force have yet to bear significant fruit however.

Another more ephemeral aspect of the problem may be more difficult to address. How many of today's American country fans grew up listening to their parents country records and the local country radio stations? How many people in China can say the same. Overseas, country music sales seems that it must necessarily appeal as much to identity as much as musical talent, the sale of style in addition to substance and with the popularity of all things American overseas of late, that may indeed be an uphill battle. – CelebrityAccess Staff Writers