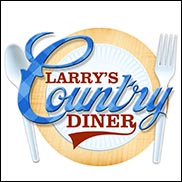 NASHVILLE (CelebrityAccess) — “Larry’s Country Diner” is on, and April’s episode series features a line-up of country and bluegrass music stars of yesterday and today. Larry Black and the show’s cast of characters cut up about current events and memories of generations past while music stars drop by for interviews and live performances on RFD-TV Saturdays and Thursdays.


This April, “Larry’s Country Diner” features a musical line-up of “Two Dozen Roses,” and “Next To You, Next To Me,” and Grammy-winning group Shenandoah the week of April 7, followed by Austin, Texas born Hot Club of Cowtown, who has toured with the likes of Bob Dylan and Willie Nelson, the week of April 14. Former member of The Statler Brothers and CMA/GMA Hall of Fame member Jimmy Fortune will appear the week of April 21; and Darrell McCall, legendary country music singer and songwriter known for his Outlaw Country brand of music guest stars the week of April 28.


Scheduled performers will share a few of their fan-favorite hits pieced in with new music and tell stories in their laid-back, exclusive interviews with Larry and the cast. Each episode is filmed live-to-tape in front of an intimate audience, which enjoys real, country cookin’ served hot from the diner kitchen.


Owned and produced by Gabriel Communications, “Larry’s Country Diner” receives 1.6 million viewers per month, regularly earning top primetime ratings for viewership ages 50 and up, according to Nielsen. It is one of the top-rated programs airing on the RFD-TV network, which is No. 9 among all cable networks in growth since 2011.