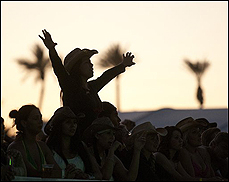 INDIO, CA (CelebrityAccess MediaWire) — Both Leon Russell and country music trio Rascal Flatts praised the death of the infamous terrorist leader Osama Bin Laden during their performances on Sunday at the final day of the Stagecoach Music Festival in Indio, Calif.

President Obama made the official announcement that U.S. troops had killed Bin Laden during a surprise raid on his compound in Pakistan on Sunday night, but word of the attack had been circulating on Twitter beforehand.

CMT reports that Rascal Flatts bassist Jay DeMarcus took the opportunity to comment on the death during his Sunday night set.

"We came here to celebrate for two reasons tonight, one, Rascal Flatts is celebrating 10 years this year, and it’s been an incredible ride. And two, that S.O.B. Osama bin Laden.." DeMarcus told the crowd before being drowned out by cheers.

"I think I speak for all of us when I say, sincerely from the bottom of my heart, Osama bin Laden, we hope you rest in pieces," DeMarcus added.

CMT also reported that Leon Russell was the first to announce the news of Bin Laden's death from stage, marking the occasion with a rendition of the gospel classic "Amazing Grace." – CelebrityAccess Staff Writers