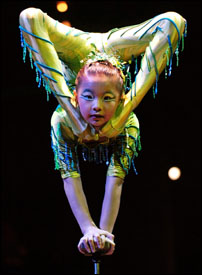 (CelebrityAccess MediaWire) — Cirque du Soleil is presenting its first-ever live arena event, DELIRIUM, an urban tale, state-of-the-art mix of music, dance, theatre, and multimedia. The North American tour kicks off in Montreal January 26 at the Bell Centre in Montreal and will be presented in very limited engagements — typically two performances only — in large arenas across North America.

For the first time in Cirque du Soleil history, lyrics have been created for the instrumental tracks and real words integrated in place of invented language, bringing to the music a fresh dimension. The texts are in English, French, Spanish, Wolof and Portuguese. Robbie Dillon, who contributed texts for Cirque du Soleil's ZUMANITY, composed the English lyrics for DELIRIUM.

In all, 21 of Cirque du Soleil's most memorable musical moments — originally created by Rene Dupere, Benoit Jutras and Violaine Corradi — have been re-mixed by Quebec producer, composer and arranger Francis Collard. The result is a hyper-energizing urban tribal beat that explodes with electronic sounds, percussions and world rhythms.

Also for the first time, Cirque du Soleil musicians and singers will be center-stage as their music will be the driving force of this presentation. Among the musicians are percussionist brothers El Hadji Fall Diouf and Pape Abdou Karim Diouf of Senegal; Gaia, an energetic group with Brazilian and Peruvian roots dipped in funk, soul and electro jazz; keyboardist and band leader Ric'key Pageot; Italian-born percussionist Raffaele Artiglieri; and Brazilian Italo-Cuban singer Dessy Di Lauro.

This unique, large-scale event may be the most massive technical production ever created to tour arenas. A 130 foot two-sided stage bisects the arena, submerging the audience in the huge set. Placing all this equipment into an arena is a complex puzzle normally reserved for stadiums. 540 feet of projections dominate the scene — the equivalent in width of almost four IMAX screens — setting the stage for a colossal multimedia presentation. Images projected range from prerecorded visuals to manipulated live feeds that create interactions between the show and the audience.

DELIRIUM will showcase 45 multidisciplinary artists, eight of whom have collaborated with Cirque du Soleil in the past. Each artist has been selected for individual virtuosity. They include 11 musicians, six singers, 18 dancers, eight acrobats and two main characters. In all, 12 countries are represented in the troupe, including two Americans: Karl Baumann (Las Vegas) who portrays one of the main characters and dancer Alexandra Apjarova (New York).