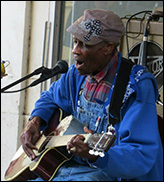 ELLISVILLE, MI (CelebrityAccess) — LC Ulmer, a Mississippi Delta blues legend and multi-instrumentalist, best known for his hand with the slide guitar, has died at the age of 87.

According to the Hattiesburg American, Ernest Hollingsworth, Jones County deputy medical examiner/investigator said Ulmer appeared to have died of natural causes after being discovered unconcious in his home in Ellisville on Sunday.

A Mississippi native, Ulmer picked up the guitar at age nine, citing influences such as Blind Lemon Jefferson and slide guitar legend Blind Roosevelt Graves and was soon busking on the streets for tips.

In 1949, he traveled to Kansas City and developed the one man band show that would define his career for many years, playing as many as twelve instruments simulatenously. His music took him across the U.S. to places such as Motoaurant on Route 66 in Holbrook, Arizona, Los Angeles and Jolliet, Illinois, where he met and performed with artists such as Les Paul, Muddy Waters, Elmore James, Buddy Guy and Howlin' Wolf.

In 2001, he returned to the area around Ellisville, Mississippi, where he spent the remainder of his life, performing regularly, both at local events such as the Juke Joint Festival in Clarksdale and at events such as the Chicago Blues Festival.

In 2008, Ulmer was featured in the documentary M for Mississippi: A Road Trip through the Birthplace of the Blues and in 2009, he was named 'Blues Artist of the Year' by the Mississippi Delta Blues Society of Indianola, Mississippi. – Staff Writers