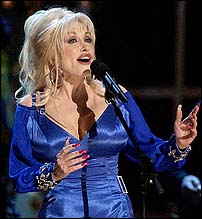 (CelebrityAccess MediaWire) — Dolly Parton is set to embark on her most extensive tour in 20 years. Kicking off on October 14 in Greenville, SC and winding down on December 19 in Seattle, WA. The Hello, I'm Dolly theater/arena/casino tour is presented by Moore Entertainment Group. The opening act is The Grascals, a band of accomplished Nashville musicians formed officially in 2004 by Terry Eldredge, Jimmy Mattingly, David Talbot, Jamie Johnson, Danny Roberts and Terry Smith.

Boasting a fan-friendly feel, the Hello, I'm Dolly arena venues will be transformed to enhance the intimate experience. The show will feature an array of sound, lighting, original set design and large video screens that will highlight the striking images of Dolly
throughout her illustrious career. And, while this year's big name ticket prices are high, Parton has personally insisted that Hello, I'm Dolly tickets be moderately priced.

Parton's last tour in 2002 hit the small club circuit in support of her most recent bluegrass album, Halos &Horns. "In 2002, I went on a tour for three months to promote Halos &Horns," says Parton. "I realized how much I missed the road and how much the fans seemed to have missed me. It was just magical. I saw that I had some fans about all areas of my career, all the way back through the years…some liked the country, some liked the pop, some liked the big production, some loved the bluegrass and the more simple sound. So I decided to combine all
the things that I've done through the years."

"The show itself has every color of me in it, from gospel to bluegrass to country to the bigger production numbers, and to the pop hits that I've been fortunate to do through the years," she says. "I think there will be something for everybody. I wanted to do it in a big way
so all of us can enjoy it. My band and I are really looking forward to this!"

October 14 Greenville, SC The Pepsi Pavilion at the BI-LO Center

December 2 San Antonio, TX The Theater at the SBC Center

December 9 Anaheim, CA The Theatre at the Arrowhead Pond

December 17 Portland, OR Theatre of the Clouds at the Rose Garden