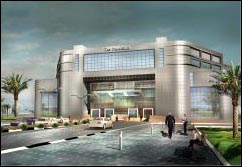 DUBAI (CelebrityAccess MediaWire) — Set to open next month, Dubai's newest venue, The Palladium, promises to bring some versatility to the Dubai market.

Located in the heart of Dubai's Media City, the Palladium has been heralded as the first multi-purpose venue in the middle east. The brand-new US$68 million venue will be able to stage anything from large scale theatre and musicals to concerts.

The main auditorium has retractable seating for 3,000 people; 4,000 in a mixed seated and standing format; 5,500 in a general admission format; and banqueting for 1500 people. With seating fully retracted, the main auditorium provides 2,500 square metres of open space for concerts or exhibitions.

The man behind the project, Raymond Gaspar has been involved in the music scene in the middle east since the 1980s and has been involved in radio and acted as a consultant for many regional festivals, arts and cultural events. including bringing full-scale opera and ballet to the UAE for the first time.

"We already have a lot of interest from international promoters about bringing in Broadway and West End London plays and musicals as well as everything from circuses to ballet," Gaspar. "I am proud to say there is, quite simply, nothing like The Palladium anywhere in the Middle East and North Africa."

CEO, Creative Entertainment Group UK, Peter Brightman added: "The Palladium is not only unique to the Middle East but I can’t think of another venue in the world with such flexibility and potential – and I have worked with most. The Palladium is a model for a whole new generation of venues worldwide."

Dubai has recently witnessed an exodus of foreign workers who had been drawn to the city during boom times. A combination of strict laws and employment requirements mean that the tiny nation may see a population contraction of as much as 10% in the next two years according to the Financial Times. – CelebrityAccess Staff Writers