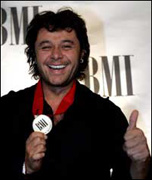 MIAMI (CelebrityAccess MediaWire) — Fabio "Estefano" Salgado has filed an updated lawsuit against his former handyman and his manager, claiming that they conspired to murder the Latin songwriter.

The lawsuit stems from an incident which occurred at his in his Venetian Island where Salgado was shot twice by his handyman, 30-year old Francisco Oliveira, however police never determined a motive for the attack.

Now, according to Salgado's lawsuit as reported by the Miami Herald, the attack occurred in an attempt to cover up the theft of millions of dollars by his financial manager Jose Luis Gil. In the suit, Salgado contends that Gil had managed to take complete control of the songwriter's finances and intellectual property, and had diverted 2.4 million dollars worth of the singer's money to the Santaria-based Ochosi Yoruba Church.

Until that time, Salgado had considered Gil to be a close confident and a "father figure." Gil introduced Salgado to both Oliveira and the church.

Salgado is attempting to recover control of his assets and seeks compensatory and punitive damages. Oliveira has pleaded not guilty to the murder and his trial will commence on February 25th.

Salgado is a well-known producer and songwriter who has penned numerous hits for Latin stars such as Gloria Estefan, Marc Anthony and Shakira. – CelebrityAccess Staff Writers