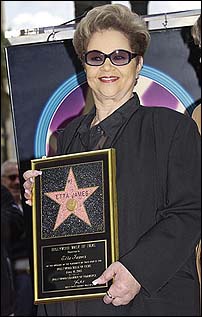 (CelebrityAccess News Service)– Etta James canceled her own concert at the Cincinnati Zoo and Botanical Garden on June 2 after a contractual dispute with radio station WCIN, which had partnered with the zoo for the performance. According to the Cincinnati Post, details of the cancellation were sketchy, but sources told the paper that "James apparently did not believe WCIN had the money to pay her for the show, so she left the venue before her performance." The opening act, Blind Boys of Alabama, performed before James' cancellation was announced to the audience of about 1,000 people. Full tickets refunds were offered

The radio station is considering a lawsuit. "Initially, there was a dispute," WCIN owner and general manager John Thomas told the Post. "In a short time we were prepared to honor the contractual obligations. But then she refused to come back and perform. We had tried to stop her and she just left saying, 'I'm not going to do it.'"

"The promoter did not live up to
the terms of the contract which called for payment to
be in cash," a spokesperson for James' management, Lupe DeLeon of Deleon Artists, advised CelebrityAccess. "This was not only written into the
contract that he signed, but he was reminded of it the
day before the performance. When she showed and was
offered a check, she exercised her right to walk.
This woman has been burned far too many times in the
past and, as there was no previous history with this
promoter, she did what she had to do. She, too, is
very disappointed.

Other concerts scheduled in the "Wild Nights at the Zoo" series are the Neville Brothers/Michael McDonald on June 29, the Temptations with Otis Williams on July 5 and Terri Clark/Kellie Coffey on July 27. – By Bob Grossweiner and Jane Cohen