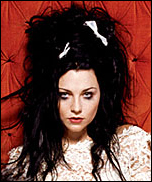 (CelebrityAccess MediaWire) — Evanescence singer Amy Lee, who was sued by former manager Dennis Rider on December 1, has launched her own suit that makes a variety of nasty claims about the man responsible for guiding her career up until he was fired last month.

Lawyers representing Lee filed the suit December 7, charging Rider with “breach of fiduciary duty,” sexual assault and battery, professional negligence and other accusations. Lee is seeking unspecified “general and special damages” and “punitive or exemplary damages,” according to MTV News. Lee is also demanding that Rider reimburse her for “all unauthorized and excessive expenditures” he charged to her credit card.

The suit alleges that Rider “neglected Lee’s career and business and has focused his efforts on having extramarital affairs, hiding them from his wife, becoming intoxicated during business meetings, physically abusing women and boasting about it, making repeated unwelcome sexual advances toward Lee, receiving fees in excess of what was provided for in his management agreement and using Lee’s corporate credit card to purchase gifts for his mistress.”

Lee and the other members of Evanescence have been working on the follow-up to 2003’s huge “Fallen” album, and the semi-goth singer/songwriter ended her working relationship with Rider last month. She told reporters at the time that she believed he was engaged in a conflict of interest by still representing former Evanescence guitarist Ben Moody.

The termination letter, which was included in the suit as an exhibit to the filing, stated: “As you are well aware, Ms. Lee was recently in an abusive relationship with Ben Moody. She has no intention of associating with any persons who engage in that sort of abusive and illegal conduct.

Rider filed the December 1st breach of contract suit against Lee, and is seeking $10 million in damages. He claims that he started managing Lee and Evanescence in late 2002 under a contract covering three records. The band have completed just one studio album since hiring him.

Rider denied the claims made by Lee’s suit. His attorney, Bert Deixler, released this statement in response:

“Rider Management and Dennis Rider have fully performed all of the duties and obligations owed by the firm under the management agreement to Ms. Lee and Evanescence. Further, Rider has always conducted himself by the highest professional standards and conducted his business relationships with Ms. Lee in a transparent, appropriate and entirely legal fashion. That she would now suggest otherwise is appalling and untrue.

“Ms. Lee is very creative in writing lyrics to a song, but now she is creating a version of reality that simply has no basis in fact, and she knows that. Dennis Rider's guidance of [the band] and Ms. Lee's personal career has made her a rock and roll celebrity worldwide and wealthy beyond her dreams. That she would now turn on him, make such spurious and groundless allegations and summarily dismiss him is illegal and disappointing beyond words.” –by CelebrityAccess Staff Writers