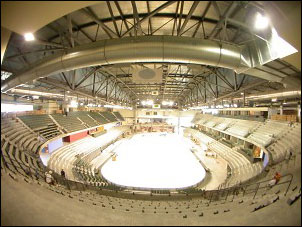 WASHINGTON (CelebrityAccess MediaWire) — According to the Daily Herald, building officials at the Everett Events Center are speaking with the arena’s designer about an apparent design flaw in the one year old venue.

The problem is a result of the placement of an air conditioning, heating and ventilation duct that interferes with performs ability to hang such equipment as lights, props and speakers from the steel supports above.

Public Facilities Board President Earl Dutton stated, "My personal opinion is that it's a design flaw. They were the experts, we weren't. To talk about stage rigging – stage rigging? I know what that means, but I don't know what it takes. Those people are the experts and they should have known."

The design and construction of the Everett Center was a cooperative effort between LMN Architects of Seattle and PCL Construction Services of Bellevue.

"We are continuing to work with PFD and we're confident that we will work out a solution," said Ed Olsgard, district manager of PCL's Pacific Northwest district office. "Obviously a lot of discussions take place during design. I think there were discussions that involved some rigging."

"This is kind of the nature of construction," he added. "It's just one of those things."

About $235,000 remains in an account set up by the public facilities district for post-construction modifications, however, this money was originally expected to be spent on more seats for the community ice rink or a tighter security system for the building. –by CelebrityAccess Staff Writers