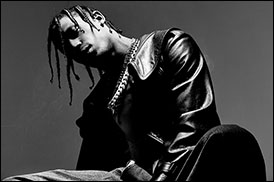 NEW YORK, NY (CelebrityAccess) — Rapper Travis Scott — who impregnated Kylie Jenner — allowed his recent Manhattan concert to get so out of hand that one of his fans fell off a balcony and was left paralyzed, the lawsuit alleges.

Scott made matters worse by ordering his security guards to drag the badly injured young man’s limp body to the stage — so he could bizarrely try to give him a ring as a consolation prize, the plaintiff claims.

“Yo, pick him up! Pick his ass up! Take this ring! Pick him up, man!” the singer can be heard yelling on cellphone footage from the show as he leans over Kyle Green.

“I was in a lot of pain,” Green told The Post. “I just laid there, and finally, an ambulance came.’’

“Everyone was packed in like sardines. It was hard to breathe,” recalled Green, who was living in Brooklyn and attending the Fashion Institute of Technology at the time.

Green said he was on a balcony when he was pushed over the railing by the surging crowd.

“I fell and hit the floor. Before I knew it, I was surrounded by security guards, who scooped me up,” he recounted. “Travis Scott was yelling at his security guards to bring me to the stage.

“They didn’t put a backboard or a neck brace on me or anything, they just kinda lifted me up and pulled me around,” Green said. “Then they dropped me in front of the stage.”

He now lives in Dutchess County with his family after leaving school and his third-floor Brooklyn walk-up because of his injuries.

His suit claims the venue and security guards should have known that Scott “had incited mayhem and chaos at prior events.” In May, the Grammy Award-nominated rapper pleaded not guilty to inciting a riot at an Arkansas concert.

Reps for Scott and the venue declined to comment.