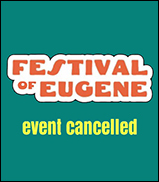 EUGENE, Ore. (CelebrityAccess) — The Festival of Eugene has been canceled after racist comments that appeared to be posted by the event's organizer Krysta Albert appeared on Facebook.

The comment was captured in a screenshot and the repost went viral, leading to sponsors pulling out of the event.

In a statement released to Eugene Weekly, Albert wrote:

The Festival has consulted an attorney and we are in the process of issuing a Press Release. Suffice to say these allegations are untrue.

The Festival of Eugene, ran by a dedicated team of volunteers, does not in the past, present nor future discriminate against anyone for any reason; neither race, color, creed, national origin, religious, sexual preference or orientation or political. Nor has it participated in racism, bigotry or any other type of discrimination or hate. The Festival is about celebrating diversity, social tolerance and inclusion of all. For those who have participated in this event in years past know this to be true.

It is always good to keep in mind social media is fertile ground for drama and speculation. The Festival its' reputation to be based on its history, mission and good will to the community at large.