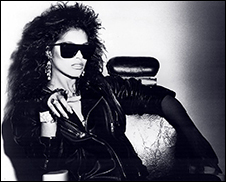 FREMONT, CA (CelebrityAccess) — Denise Matthews, a singer, model and actress who toured with Prince under the stage name Vanity in the 1980s, died on Monday at a hospital in Fremont, California. She was 57.

According to the New York Times, Ms. Matthews’s sister Renay Matthews confirmed her death. She said Matthews checked into the hospital on Saturday for treatment of long-term health issues with her kidneys.

Matthews met Prince in 1980 while attending the American Music Awards and soon became both professionally and romantically involved with the performer, joining the female vocal trio Vanity 6 he assembled, and touring with Prince.

Vanity 6 would go on to release 4 singles and the 1982 album "Vanity 6" which proved to be a minor hit, however, the group broke up in 1983 with Prince and Matthews parting ways.

Matthews went onto a solo career, releasing two albums under the Motown Records flag — "Wild Animal" and "Skin on Skin", producing minor hits such as "Under the Influence" and "Pretty Mess." She also recorded some songs for film soundtracks, including "Faraway Eyes" for the film Action Jackson.

Matthews also pursued an acting and modeling career, appearing as a model in several ad campaigns and Playboy Magazine, as well as roles in movies, including The Last Dragon, Never Too Young to Die, 52 Pick-Up and 1988's Action Jackson, her highest profile role, in which she starred opposite Carl Weathers, Craig T. Nelson, and Sharon Stone.

In 1994, she overdosed on crack cocaine and nearly died from renal failure, prompting a reassessment of her life. She renounced her stage name and became a born-again Christian, taking speaking engagements at churches across the U.S.

"When I came to the Lord Jesus Christ, I threw out about 1,000 tapes of mine—interview, every tape, every video. Everything," she said in a 1995 interview.

In addition to her sister Renay, she is survived by two other sisters, Patricia Matthews-Dalron and DeBorah Matthews-Brown; her mother; and her stepparents, Kathryn and Paul Garrett. – Staff Writers