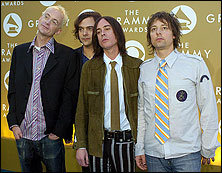 NEW YORK (CelebrityAccess MediaWire) — The pop group Fountains of Wayne along with their label S-Curve Records and the National Football League have created two commercials promoting the NFL.

During the Monday Night Football broadcast last week (December 13, 2004), the NFL debuted the commercials using the music of Fountains of Wayne's "All Kinds of Time" from the band's critically acclaimed third album Welcome Interstate Managers, which was also nominated for a Grammy. A 30-second spot was generated for use on television while a 60-second clip will be used in arenas. The longer version can be viewed online at www.fountainsofwayne.com/media.

"I always pictured a bunch of slo-mo 'NFL Films' footage in my head when I wrote this song," says Fountains of Wayne's Adam Schlesinger. "Too bad the commercials aren't long enough to include a little room for that guy with the low voice to do a little rap in the middle."

In the commercial, slow motion clips of quarterback greats in crucial, historic moments fade into one another as the song unravels its tale in which the narrator describes what's running through a young pro quarterback's mind in the few seconds it takes from getting the snap to throwing the pass.

In other Fountains of Wayne news, the band and S-Curve are set to release a collection of their mythologized and coveted B-Sides some time in 2005. The CD will contain almost every B-side the band has released since 1996. The CD will also contain several new songs written especially for this collection. An album of new material will follow. –by CelebrityAccess Staff Writers