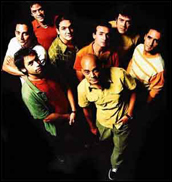 Things turned ugly though after the 5,000 capacity venue filled up and thousands of fans who had been turned away went on a rampage, breaking windows at the university, as well as stealing from local shops, cars and even a church.

According to Costa Rica's Tico Times, local police and anti-riot squads had to use smoke gas to restrain the mob.

Ten minor injuries were reported and 35 arrests were made according to NME.com. –by CelebrityAccess Staff Writers