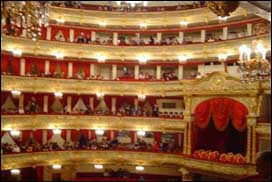 (CelebrityAccess MediaWire) — The world-famous Bolshoi Theatre in Russia is at the centre of a funding row with the government, BBC reported Wednesday.

The ministry of finance has announced it does not have the cash to pay for planned renovation work.

The Bolshoi, which has already closed for work meant to last three years, has been told to slash its costs significantly if it wants to proceed. But the project’s chief architect, Nikita Shangin, says he will walk out if the theatre does not get the money.

The government says it will not pay the $880 million the theatre says the work will cost. It has called on the Bolshoi management to cut its budget by around 60%.

The government’s position is clear. They say they could use that kind of cash to build 10 theatres,“ Shangin was quoted by BBC as saying.

”So I say fine, let’s do that — but they won’t be the Bolshoi. This theatre is part of our cultural heritage.“

But the Bolshoi today is crumbling. Its managers say the 180-year-old building is in urgent need of structural repairs. The walls and foundations need reinforcing. The stage needs updating and, behind stage, the equipment is ancient.

The theatre’s director says it is not even safe to be inside as the building no longer conforms to modern safety standards.

He argues that the money the government is offering is only enough for a cosmetic facelift. Yet, he says, the Bolshoi needs so much more.