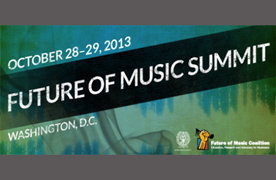 WASHINGTON D.C. (Hypebot) – Future of Music Coalition is holding its annual gathering, the Future of Music Summit 2013, in Washington, DC in late October. Described as the "only conference that makes the connection between musicians and fans, policymakers and academics, legal experts and technologists, media professionals and entrepreneurs," Summit 2013 brings together a diverse group of speakers and attendees. A live webcast of speakers will be available for those who can't attend.

This year's Future of Music Summit will be hosted at Georgetown University October 28 and 29 with an unofficial Pho dinner happening on the 27th:

"Summit 2013 puts creators front-and-center on issues ranging from the economics of cultural production to healthcare to musicians making a difference in their communities and beyond. Join us in Washington, DC for two jam-packed days of discussion that highlight the experiences of musicians, songwriters and others whose inspiration and ingenuity is shaping the future of music."

"There is so much energy around music right now, we're excited to reflect that vitality at Summit 2013…Musicians everywhere are making their voices heard on the issues that impact them and Future of Music Summit 2013 is the perfect place for those voices to mingle with others who share a vision for a healthier music ecosystem."

"This year, we'll be looking at proposed changes to US Copyright law, artist compensation and access to audiences, and fundamental issues concerning creators at the local level, like health care and infrastructure…We'll be getting specific about what is and isn't working for the music community and also hearing from policymakers, academics, legal experts, industry leaders, and more about shared challenges and opportunities."

The current early bird registration is $199 with scholarships for working musicians, student pricing and volunteer opportunities.

A live webcast of events at Lohrfink Auditorium will also be available.

An overall schedule is not yet available but confirmed speakers include: