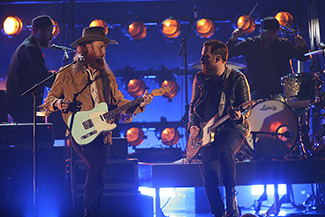 “It’s been 30 years,” Brooks told the crowd. “Never have I felt more like a part of this industry. It’s weird. We don’t belong to a label or anything, but every label guy in the industry is hugging me out there. It feels like family.”

Keith Urban won theSingle of the Year award for his hit “Blue Ain’t Your Color.” Urban co-produced the song with longtime collaborator Dann Huff and it was mixed by Chris Lord-Alge. “Blue Ain’t Your Color” was the fourth single from Urban’s Ripcord album and stayed atop Billboard’s Hot Country Songs chart for 12 weeks.

Chris Stapleton won his second Album of the Year Award for From A Room: Volume 1 and Male Vocalist of the Year.

Miranda Lambert took home the trophy for Female Vocalist of the Year,

Guitarist Mac McAnally won Musician of the Year for a record-tying ninth time, pulling even with Nashville’s most-venerated musician, Chet Atkins. The award was presented by host LOCASH during the pre-telecast portion of the awards.

Little Big Town won its sixth straight Vocal Group of the Year Award on a night that included a tribute to the late, great Glenn Campbell with their touching version of his “Wichita Lineman” that featured an appearance by its writer, Jimmy Webb.

“The talent we see in this category alone just humbles us so much,” LBT's Phillip Sweet said. “We love making music, we love seeing your faces … .”

“I don’t deserve (to be) in his league at all,” McAnally said of Atkins, whom he met as a child. “I’m happy to be in the same phone book. He’s one of my all-time heroes.”

The complete list of winners from the 51st annual CMA Awards