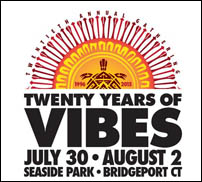 BRIDGEPORT, CT (CelebrityAccess) — Organizers for the Gathering Of The Vibes festival said that in 2016, the event would taking a hiatus. THe festival, which started in 1996 as "Deadhead Heaven – A Gathering Of The Tribe" in the wake of Grateful Dead frontman Jerry Garcia's Death, changed names to Gathering of the Vibes and has been held annually since.

Festival organizer Ken Hays posted a notice about the decision to take a hiatus on the festival's Facebook page.

Over the past 20 years, we've traveled many roads together and experienced the beauty and magic of what happens when thousands of like-minded souls converge to celebrate life, love, music and community.

When Jerry died, we all took a moment to look around and take account of those for whom we are grateful; time stopped, we formed a circle within our cosmic music community and said to each other, "It's okay, we're going to get through this TOGETHER."

I'm enormously proud of Gathering Of The Vibes and our community that has carried the torch representing the spirit of Jerry Garcia, the music of the Grateful Dead and the uniqueness of the Deadhead community.

As you know, we pour our hearts and souls into producing this "rare and different" festival, but after a seemingly never-ending amount of thought and deliberation between myself and those closest to me, I've made the decision not to move forward with Gathering of the Vibes in 2016. Producing the Vibes as an independent promoter is a challenging endeavor, and honestly, after 20 amazing years, we need a time out.

This is not the end of the Vibes my friends; it's simply a pause, an opportunity for us all to reflect on the memories, explore new and exciting festival initiatives while planning our triumphant return in 2017.

We know how important the Vibes is to all of you, and ask for your love and support as we look to the horizon with great excitement. Paradise and new adventures await us VibeTribe. Take good care of each other, be kind and know that our love will not fade away!

Be well, continue embracing the music and we'll stay in touch.