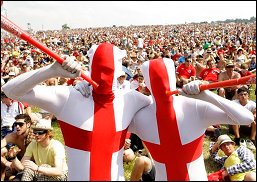 LONDON (VIP NEWS) — Tickets for Glastonbury Festival 2011 went on sale Sunday and sold out in just over four hours after thousands of fans flooded the website and phone lines.

The festival's website and Twitter feed apologized to those who missed out, adding there had been some issues with getting through "due to the sheer volume of people."

Fans were able to reserve up to eight tickets at a time.

They had to pay a £50 deposit now and the rest when the booking site re-opens on 1 April 2011. But they needed to have registered on the site before Sunday.

Michael and Emily Eavis, the festival's organizers, said, "Thanks for all your continual support. We're looking forward to seeing those of you who got tickets next June."

Emily Eavis added, "Sorry those of you who waited on the lines but couldn't get tickets. Wish there was a way to fit everyone in."

The site had to switch its front page to text only due to the thousands of people trying to access it.

The festival at Worthy Farm in Somerset has 137,500 public tickets and a site capacity of 177,500. Last year for its 40th anniversary its huge line-up included Stevie Wonder and Kylie Minogue.

Concerns about overcrowding at Glastonbury Festival were raised afterwards by Mendip District Council in its annual report on the event.

The council report said "subjectively the site felt extremely busy". But it added it was an "unqualified success" and that all recommendations were about building on good practice.