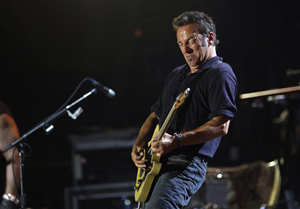 GLASTONBURY (CelebrityAccess MediaWire) — This weekend saw the return of the massive Glastonbury Festival and true to form, approximately 140,000 fans experienced the festival's mud and memorable performances.

Headliners a this year's event included the 63-year-old Neil Young and Bruce Springsteen and the E Street band.

Springsteen, who performed on Saturday night, aroused the ire of fans when he refused to perform his iconic 'Born in the USA, despite, cheers and catcalls requesting the song. He did salt a long set with many of his classic hits however, playing fan favorites such as 'Born to Run', 'Glory Days' and 'Dancin' in the Dark.'

"He was really alive and really energetic but he didn’t play Born in The USA and everyone was quite gutted about it. I don’t know why he chose to do that." one Springsteen fan, 30-year-old Danielle Folley, told the Guardian.

For other fans, the omission wasn't a big deal. "I’m a big Bruce fan and it was the first time I’ve seen him and one of the best live shows I’ve ever seen. He played everything I wanted to hear." Ian Parker, 27, told the Guardian.

Other highlight performances came from Lily Allen, who paid a silent homage the fallen King of Pop by wearing a single white glove during her performance. She also suffered a 'wardrobe' malfunction and flashed her breast to the crowd just before launching into a rendition of her hit song 'Littlest Things.'

New York-based Lady Gaga also made the scene, with a set that featured numerous costume changes and a bustier that spouted gouts of flame.

Blur closed the event out with a performance on the main stage and brought in the peak television audience for the festival with an estimated 1.9 million viewers, the BBC reported.

The global pandemic was also on hand at this year's Glastonbury and 6 people were advised to leave the event after being diagnosed with possible infection by the A/H1N1 or 'swine flu' virus. More than 4,300 people in the UK have been diagnosed with the virus, the World Health Organization has reported.

Mud and swine flu aside, Eavis has already started to work on Glasto 2010, the 40th anniversary of the festival, and already booked 4 major acts for the event, including two who've never performed there before, Billboard said. – CelebrityAccess Staff Writers