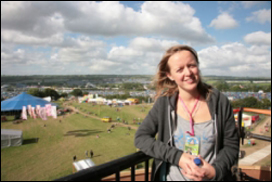 GLASTIONBURY, UK (VIP-NEWS) — The headliners for the next Glastonbury Festival are being finalised earlier than ever and will be confirmed "pretty soon", organisers have said.

Three months after this year's event, Emily Eavis said they were talking to "a few" stars about headlining in 2009.

She declined to name them, but did say: "It's not Coldplay, it's not U2 and it's not the Rolling Stones."

She also said Franz Ferdinand and The Ting Tings would be "somewhere on the bill" after playing a show for locals.

"We are completely fired up about next year at the moment," she said.

Ms Eavis, the daughter of festival founder Michael, said she had never known organisers to be talking to headliners so early.

"But we have. And because our tickets go on sale on 5 October, we've brought it forward.

"So we're ensconced in chat about next year and there's a lot of good feeling after such an amazing festival [this year]."

No headliners are booked yet, but Ms Eavis added: "We're talking to a few people at the moment and I think pretty soon we'll have some stuff sorted."

The festival broke new ground by booking US rap star Jay-Z to headline this year – a controversial move, but one that turned out to be a success.

Asked whether Glastonbury was looking to do something different again, Ms Eavis replied: "We can't repeat that can we? That was amazing.

"Unfortunately you can only do something like that once."

Referring to next year's headliners, she added: "We've got a real mixture actually at the moment."

Bookmaker Paddy Power is taking bets on who will headline the Saturday night at Glastonbury 2009. Radiohead are 4/1 favourites, with Coldplay, Oasis and Muse close behind.

Franz Ferdinand and The Ting Tings, meanwhile, performed at the Equinox Party at the festival site in Pilton, Somerset, on Friday.

Ms Eavis described the show as "a little taster" for next year.

Tickets for next year's festival will be available to buy, or reserve for a £50 deposit, from 5 October.

The passes will cost £175 and all fans must have registered their details with the festival before they can book their places.