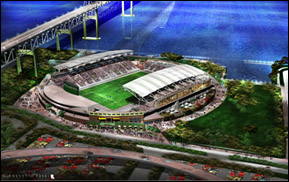 CHESTER, PA (CelebrityAccess MediaWire) — Keystone Sports & Entertainment has pacted with venue management company Global Spectrum in what it calls a "comprehensive partnership" over a new 18,500-seat stadium being built in Chester, Pa.

The stadium, slated to open in 2010, will serve as a home to Major League Soccer team the Philadelphia Union, owned by Keystone Sports and Entertainment.

According to the Philadelphia Business Journal, a number of other subsidiaries of Global Spectrum's parent corporations, Comcast-Spectacor will be in on the deal with New Era Tickets providing ticketing services and Ovation Food Services handling the food, beverage and catering concessions at the stadium.

The purpose-built soccer stadium will also provide a home to the Philadelphia Independence of Women's Professional Soccer. Builders broke ground on the project on December 1st, 2008 and has been underwritten by Delaware County and Pennsylvania to the tune of $77 million. Overall, the project is estimated to cost upwards of $115 million when all is said and done. – CelebrityAccess Staff Writers