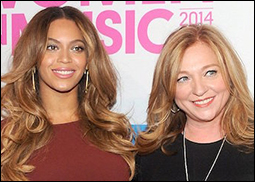 NEW YORK (VIP NEWS) — Beyonce`s Parkwood Entertainment company is getting an overhaul, with longtime GM Lee Anne Callahan-Longo leaving the company after five years, along with several other principals and staff members.


The move is part of a shift for the company as sources say Beyoncé is relocating Parkwood`s headquarters from New York to Los Angeles, where she spends the majority of her time.


Parkwood`s head of digital Lauren Wirtzer-Seawood left the company to join Instagram in November 2015 — former Pledge Music executive Dan Ghosh-Roy took on that role in December — and Callahan-Longo left before the end of the year. Steve Pamon, who ran the sports and entertainment marketing department at JP Morgan Chase since 2011, also came aboard as Chief Operating Officer in December as remaining staff began shifting to the West Coast.


Pamon was responsible for Chase Bank`s sponsorship deal for Beyoncé and Jay Z`s On The Run stadium tour in 2014, which brought in an estimated 850,000 fans and grossed more than $100 million. He`ll be tasked with running the day to day operations for Parkwood moving forward.


“Last year, Parkwood Entertainment created new departments and recruited new executives from the tech, business and entertainment sectors who joined the team to help grow Parkwood and its interests," Beyoncé's rep Yvette Noel-Schure said in a statement provided to Page Six — which also reported that former Warner Bros. Records exec Peter Thea is now working at Parkwood — adding that senior staff were offered a chance to "reposition and stay on," while others decided to leave the company. "Lee Anne Callahan-Longo has worked with Beyoncé for the last 10 years. Their friendship supersedes business, and while she is no longer an employee of Parkwood, she will remain an imperative part of Beyonce’s life." –According to Billboard