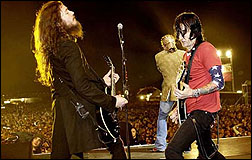 MONTERREY (CelebrityAccess MediaWire) — The Japanese tourdates that Guns N' Roses were forced to cancel last April, when bassist Tommy Stinson injured his wrist, have been rescheduled.

Their world tour launches on June 2nd in Monterrey, Mexico. The band will be playing a mix of GN'R hits such as "Sweet Child O' Mine", "Patience" and "November Rain" as well as new material from their forthcoming album "Chinese Democracy."