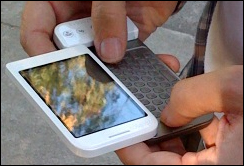 SAN FRANCISCO (CelebrityAccess MediaWire) — Google showcased its new Android software ahead of the expected announcement of the G1 first mobile phone to use the operating system. To help the G1 compete with the 800 pound iPhone gorilla, Amazon may be preparing to launch a mobile version of its popular mp3 store Amazonmp3.

Like the iPhone, G1 appears as if it will feature a touch screen but also include a physical qwerty keyboard accessible by sliding the screen away. To date however, this is somewhat speculative as no official image of the device has been revealed.

One of the key features of the iPhone is the capability for users to download songs directly from iTunes onto the handheld device without needing to sync with a PC so any device that intended to compete with the iPhone as a mobile media player would need to address this feature. Amazon may be able to trump the iPhone by including purchasable movies in their direct-to-phone store offerings, one feat Apple has yet to translate from iTunes.