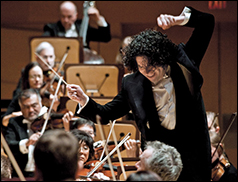 CARACAS, Venezuala (CelebrityAccess) — A tour of the US by conductor Gustavo Dudamel and the National Youth Orchestra of Venezuela has been canceled days after Mr. Dudamel publicly criticized the administration of Venezuelan President Nicolás Maduro.

Mr. Dudamel, who is the music director of the Los Angeles Philharmonic and of the Simón Bolívar Symphony Orchestra of Venezuela, is arguably one of the most recognized Venezuelans in the world.

News of the cancellation, which was first reported by El Nacional, follows the publication of a New York Times editorial by Mr. Dudamel last month, in which he level criticisms at the government of Venezuela, suggesting that the country was living through a period of "violence and repression" and speaking out against a vote to change the country's constitution.

"In the past, I have fought the urge to enter the political discourse, believing that it was not my role. Yet people have tried to read my past actions like tea leaves, searching for deep political meaning," Mr. Dudamel wrote in the New York Times in the July 19th editorial. "I am not looking to take sides; I am willing to take a stand. For me it is about the values and processes that choose our political leadership, not who that leader is ultimately."

On Friday, Venezuelan President Nicolás Maduro openly mocked Mr. Dudamel in a televised appearance. “Welcome to politics, Gustavo Dudamel,” Mr. Maduro said on Friday, according to The Associated Press. “But act with ethics, and don’t let yourself be deceived into attacking the architects of this beautiful movement of young boys and girls.”

Mr. Dudamel and the Youth Orchestra had been slated to perform in September at Wolf Trap in Virginia, the Ravinia Festival in Illinois, the Hollywood Bowl, and the Greek Theater in Berkeley, Calif.