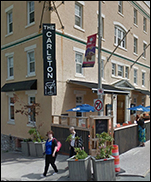 HALIFAX, Nova Scotia (CelebrityAccess) — Halifax live music venue The Carleton Music Bar and Grill was forced to file for bankruptcy after a rough August and is likely heading for closure.

According to the CBC, owner Mike Campbell blames the venue's financial woes on a large scale building project across the street and a declining interest in live music in the city.

"I'd say we've lost $100,000 a year over the last three to four years," Campbell told the CBC. "Nobody can continue to lose money at that rate. And you know, we've had great investments in the past, but business is business and you get to the point where you're far enough in the hole that even if things got great all of a sudden, it would still take you forever to get out of it."

Campbell opened the Carleton in 2008 but said the downtown followed the start of construction at the Nova Centre across the street, claiming that it caused noise, dust and eliminated parking spots in the area. The CBC said Campbell and other downtown business owners have started legal action against the Nova Centre and the municipality, alleging that their revenue has plunged by 30% since construction began.

Campbell told the CBC that he has about a month to develop a plan to save the venue, including trying to find a buyer, but he was no sanguine about his prospects.

As a part of that plan, Campbell has launched a Patreon campaign for the bar, seeking $5,000 in funding per month to survive until the Nova Centre is complete. So far, the campaign has garnered support from 229 backers and is approaching the half-way point.