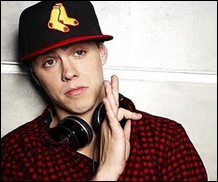 Sam Adams' EP, Boston's Boy was released digitally in March as the flagship artist for startup label, 1st Round Records and immediately landed the #1 iTunes Hip-Hop spot and #2 overall. As an independent artist with no mainstream radio support who seemingly came out of nowhere, Adams' debut was met with much controversy however he subsequently received offers from multiple major labels. Adams and the 1st Round Records team have opted to remain independent for the time being and released a physical bonus track edition of Boston's Boy in July via a distribution deal with Fontana.

Along with all of the changes in his life this past year, Adams spent the first half of 2010 juggling his schoolwork as a student at Trinity College where he was also captain of the soccer team and his flourishing music career. He is taking this year off to focus on touring and recording his upcoming full length release.

Sam Adams can currently be seen in the ad campaign for New Era Cap where he was selected to be a Flagbearer in their national "Fly Your Own Flag" advertising and marketing campaign. The campaign focuses on self-expression and individuality, with Adams as one of a select few chosen by the company to represent the spirit of this.