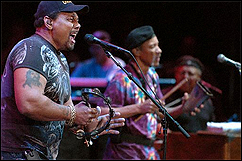 Honoring a century-old New Orleans tradition of forming a “Second Line” celebratory procession, several organizations have banded together to host the first of a nationwide series of benefit concerts purposed exclusively to assist Louisiana musicians. Produced by House of Blues and Michael Murphy Productions, Inc. “Second Line On Sunset: A Celebration of New Orleans Music To Benefit The Musicians of Louisiana” will feature some of New Orleans’ legendary performers, many of whom are featured in Murphy’s documentary, Make It Funky! This kick-off event will take place on October 27, at House of Blues Sunset Strip, West Hollywood, in association with sponsors MSN, Gibson Guitar Corp., Putumayo World Music and the Beverly Garland Hotel.

“Second Line On Sunset” is designed to create a pipeline for employment for Louisiana musicians, provide needed aid to musicians and their families suffering in the aftermath of Hurricane Katrina and to focus public attention to the importance of preserving the musical culture that makes New Orleans so unique. Net proceeds will go to the MusiCares Hurricane Relief Fund, established to ensure that musicians and music industry veterans whose lives and livelihoods have been destroyed can begin to rebuild, and the Louisiana Cultural Economy Initiative whose primary mission is to support the development and enhancement of the unique, authentic arts and culture of Louisiana.

“When I approached House of Blues with the idea for this event," says Murphy, "it was one way I knew we could support the city. We established three goals: to keep New Orleans musicians working; to keep the true voice and spirit of the city in the public eye; and to raise money for sustaining New Orleans culture during this time of rebuilding. Between the efforts of my company, House of Blues, the webcast by MSN Video, the great bands from New Orleans, and with support from local and national sponsors, 'Second Line on Sunset' is a part of this effort. New Orleans is a vibrant community and one that is on the road and will be welcoming the people of Los Angeles to its temporary neighborhood at the House of Blues for a night of true New Orleans entertainment on the 27th. We hope everyone will come funk it up"with us there, and we hope to make this event the beginning of many more!”

“These are certainly very challenging times if you call New Orleans home. Our community will rebuild and claim its place as one of America’s great cities,” says Schneidau. “We encourage the citizens of Los Angeles to support that effort as we present an incredible night of New Orleans culture which will directly benefit the ‘keepers of the flame’ – our musicians.” –Bob Grossweiner and Jane Cohen