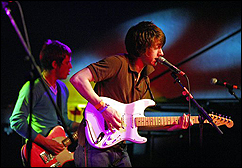 LONDON (CelebrityAccess MediaWire) — In pure Lefsetzian form, the London Telegraph columnist Tom Horan has recognized a revolution going on in popular music, and that Britain – as it has so many times before, from the Beatles and the Stones, to punk and dance booms – is once again at the heart of it.

Horan notes that due to new data collection tools, leveling the playing field between hit radio singles and all digital downloads, indie rock superstars Arctic Monkeys currently have 18 songs in the singles chart, including every track on their new album, “Favourite Worst Nightmare.” But Horan’s point is not about the new technology, rather that the Monkeys’ unwavering success has come by the traditional “marketing muscle of a multinational company but by the devotion of a set of enthusiasts.”

“A wildly unpredictable chart full of unknown bands; releases you can no longer hold in your hands; no more Top of the Pops! All the certainties of the past 35 years of pop music are crumbling,” writes Horan. “But what a rich time it is creatively. Music in Britain today has about it a thrilling mixture of meritocracy and subversion. Anyone can form a band and, if they're good enough, achieve a following to match that of Arctic Monkeys. The momentum required can be gained without the involvement of any record label. And that is where the revolutionary aspect comes in. For in 2007, music, with its capacity to unite and energise huge crowds, is suddenly no longer in the hands of businessmen but in the hands of ordinary people.

“In this sense, pop music seems to have come full circle.”

Horan explains that music is once again becoming an expression of popular emotion, similar to the anti-establishment culture of the Vietnam-generation in the 1960s, rather than simply a product to sell to the masses. In the opposite vein, however, today’s music does not seem to be driven by politics or world events, and generally has no unifying characteristic whatsoever.


“In fact,” Horan states, “it would not be trite to say that the principal motivating force in the career of Arctic Monkeys is simply to have a laugh.”

The popularity of new music has only been intensified by modern technology, rather than finding the market oversaturated with DIY-acts, as many once predicted. Horan points out that the U.K. will host more than 450 music festivals this summer, and demand for tickets to live performances has never been stronger. Young, entrepreneurial musicians have found away around the age-old music industry machine.

“The idea that, in order to play music to an audience, you have to sign a record deal, pay a promoter, hire a venue, charge for tickets and sell drinks was one that had gone unquestioned for decades. Today's new bands whip up a crowd through online word-of-mouth, turn up, and play for the hell of it – in someone's living room, on a Tube train, in a disused building.

“To subvert an industry as powerful and established as the music biz creates a very significant precedent. In the simple pursuit of a laugh, British music has demonstrated the means; it surely won't be long before it is harnessed to some more profound kind of end.” –by CelebrityAccess Staff Writers