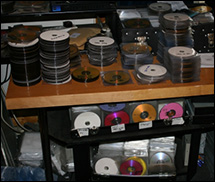 (Hypebot) – While it's difficult to get an exact number on such things, it seems as though Amazon has been doing a tidy trade in counterfeit CDs of late, with third party merchants now ripping albums off platforms like YouTube and reselling them in a physical format.

A provocative question — of course knowing the answer precisely would mean that Amazon actually knew which CDs were counterfeit to begin with. That means we need to guess, but sometimes guesses are more accurate than we may give them credit for.

Example? For years we heard that about 20% of songs on streaming services were unlicensed. Turns out that’s pretty close to true. When it’s expressed as a percentage rather than a raw number, it may not sound so bad. 20% sounds a lot better than 4 million, right? This is an old Google trick–telling us that the amount of bad behavior is a low percentage. They leave out the “of what” step, which in Google’s case is always an astronomical number due to scale.

That same basic theory works with Amazon, too. While Amazon is busy stiffing songwriters with filing mass NOIs that absolve them from paying songwriter royalties, it turns out that Amazon is also making a tidy profit selling counterfeit CDs.

It’s also hard to extract the exact number of CDs that Amazon sells, but Soundscan reports about 34 million in sales in the “Internet” category. Let’s be conservative at say that Amazon is about 1/3 of that number. That would mean that based on recent estimates, Amazon sold about 2 million counterfeit records in 2015 alone.

Two million counterfeits sold by the smartest guys in the room. A public reporting company that supposed to be at the leading edge of all things great and good. More like the bleeding edge.

But this raises another question. At one time, counterfeits were mostly major label releases of hit records that could hide in the cracks. Based on the mass NOI filings, it now looks like some counterfeits may be stream ripped from YouTube and then sold as CDs.

It’s absurd that Amazon is a counterfeit swap meet, but it’s even more absurd that they didn’t see it coming.

Or maybe they did.