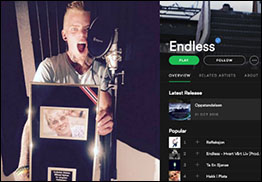 (Hypebot) – As an unsigned artist, you may be struggling to work past the <1000 play count on Spotify. Luckily there's plenty you can do to grow your following on the streaming service. In this interview, unsigned Norwegian rapper Endless shares how he grew a massive following on Spotify, sans label. Guest post from Ditto Music Are your Spotify streams not where you’d like them to be? Want to get more plays and followers on your artist profile? Don’t worry, a low number of streams on Spotify is a common problem for unsigned artists at the start of their music career, and there’s plenty you can do move out of the < 1000 club. We recently spoke to independent Norwegian rapper Endless to find out how he managed to release music on Spotify and achieve millions of streams without the backing and promotional power of a label. Endless explains how to get more Spotify plays without a major label
First of all, how do you get your music on Spotify?

I actually started using Ditto from the first track I ever released on Spotify/iTunes etc. A colleague told me about Ditto, as I was looking for ways to release my songs officially without being signed to any label.

When and how did you get your first big break?

The first big break I had was with the single Refleksjon back in early 2009. It's a little funny actually, because that single spread all over the country through chat-windows, MP3 players and MSN Messenger mainly, with no radio listings at all.

I didn't really realise how viral it had gone before people started screaming the lyrics throughout the whole song on every show I did. It was a really strange experience, and really wonderful! It started out with a quarter million views on the YouTube version just in a couple of months.

Spotify itself went live in 2008, if I'm not wrong? Anyway, later on in 2009, I released Refleksjon on most major streaming platforms via Ditto Music, and a couple of years later I received a Golden Record Award for it. Very proud!

How important has streaming been for your music career?

In addition to my fans spreading the music by actively sharing, commenting and recommending it, streaming is the reason so many people have been introduced to my music. As an ‘underground’ artist without any radio airing, my fans are the number one reason I'm heard around Scandinavia, and for that I am forever grateful!

How do you promote your music and what has helped you get millions of streams on Spotify?

I've been very active on different social media platforms, writing & connecting with my fans. I also like to take time talking to people attending my gigs after shows.

What advice would you offer other indie artists looking to get more streams?

I'd say connecting with your fans is one of the key elements. Get to know them better by learning who they are. Comment on what they do and like their pictures. Involve them in your activities. Let them get to know you as the person you are, and not only as the artist they listen to. People are very curious about other people.