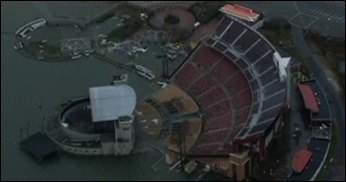 NEW YORK (VIP–NEWS) — Due to the hurricane Sandy numerous of Artists are cancelling shows outside of the New York metropolitian area.


Perry Greenfield, who manages singer-songwriter Rufus Wainwright, spent the last two days with nowhere to go because his Red Light Management office is on Sandy-ravaged Wall Street. Wainwright's appearance, with fun. and the National for the Freedom to Love Now! marriage-equality benefit at the Beacon Theatre, was canceled tonight – and Greenfield had to deal with the logistics from his Manhattan apartment with no Internet or cable. "It was tough yesterday," he says by phone. "We had a few stranded folks."


In the short term, the canceled concerts will merely be a financial hit for artists, venues and promoters. When New Yorkers and other residents in Sandy-affected states assess the damage, some predict longer-term repercussions. Sarah Kesselman, director of events and talent buyer for Santos Party House in Manhattan, had to postpone a sold-out Shiny Toy Guns show tonight and may not reopen until Thursday – tough to overcome during Halloween week. "It's not that there is damage to the club, but we don't have power, so it's just a matter of canceling all the concerts," she says. "It is affecting us financially." A top promoter told Billboard he expected "an impact on our budgets and earnings."


Smaller clubs in especially rough weather zones may have longer-term problems, too. Owners of New York fixtures such as legendary jazz club Village Vanguard, Arlene's Grocery and Terra Blues couldn't be reached Monday, but Greenfield fears the worst. "It's in a basement in the West Village," he says. "Who knows what's going on." John Scher, a longtime New York City promoter who had no power in his suburban home, is even more apocalyptic. "New York's a disaster. Manhattan's closed down," says Scher, who canceled three shows in the city this week, including Rickie Lee Jones Thursday at the Concert Hall. "There's no power in Manhattan from 34th Street south – that pretty much makes about 90 percent of the clubs in the rock space, and the subways are completely closed and flooded. Losing a week of shows probably will hurt a lot."

Other events that were impacted by the hurricane include:

Roger Hodgson's Nov. 2nd show at the NYCB Theatre At Westbury has been canceled.

Jay Black's Nov. 3rd show at the NYCB Theatre At Westbury has been rescheduled to Nov. 11 and will be without support from Bill Medley.

Gary Allen's Nov. 4th show at the NYCB Theatre At Westbury has been canceled.

The Wisin y Yandel concert scheduled for Saturday, November 3 at Madison Square Garden has been postponed. The rescheduled date will be Friday, January 18, 2013.

An Evening with Chris Isaak, originally scheduled for Friday, November 2 at Beacon Theatre, has been rescheduled for Sunday, November 11. Other postponed dates at the Beacon include Brandi Carlile, Freedom to Love Now, Meat Loaf and Citizen Cope.

The Rita Ora, Iggy Azalea, DJ Havana Brown at the Trocadero in Philly has been canceled.

Yasiin Bey (AKA Mos Def) canceled his Sunday show at the Apollo.